The gate of the city in our design is not the precise geographical location on a boarder of the city of Płock, but the place where people enter the city. The public transportation to bigger cities nowadays are mainly buses. The main train station is poorly connected with the city centre and what is more, railway transportation schedule is not convinient for its users to get to the surrounding cities and to the capital, Warsaw. The car still stays the most used transportation by the inhabitants and visitors.
The area around the train and bus station are not indicating where the city centre is located, which may be confusing while first visit to the city. To be lost is a common feeling.
As a result we would like to enhance the path in between the bus stop and the city centre. In our design, n collaboration with the other group, we create a path from the Train Station, through the Bus Station to Nowy Rynek, which is a square where Tumska Street, the most representative in the whole city, begins. Our team work would like to revitalize this area.
Other features would turn into interesting places as a poor conditioned covered market, streets and buildings. We would like to give a proper way to the people arriving in Płock. As we would like to create connection in between different spots of the city, it is important for us that most stakeholders of the project would, at least, understand each other. In fact that is the only way discussions could lead to productive results. A cohesion and connection is then necessary to be created.
On the plot, there are proposed many facilities for all kind of users- from children to elderly people, citizens and tourists, culture and sport lovers. The design concludes many open-air facilities, which may be active occasionally as well as on a regular basis.
We introducted an Open-air Theatre (1), in park, between school and The Grand Theatre of Płock, in greenery there is also a place for active users- open-air gym (2). The western side of the green axis, there is a square (3) with water and places to sit and wait- this is an area between school, park and bus stops.
Our main idea for the new Nowy Rynek is to bring there life during day and night. That is why we created recreational areas (4) to relax between greenery and fountains and skateparks (5) for youngsters. On the southern part of square we create pavilion (6), where users could sit and consume something during day and night. The Pavilion is in a shape of a horseshoe, reffering to the historical building existing in the same place back in the days.
We also suggest creating a direct access from the square to the existing market place (7), renovating it, adding boulvard and a playground (8) for children, who are not big fans of grocery shopping rutine.
On the northern part of the plot, between Nowy Rynek and main bus station we strongly suggest creating a raised-up street to slow down the communication on Sienkiewicza street, and in addition a height dominant- observation point for the whole plot as well as Tumska Street and the Old Town. 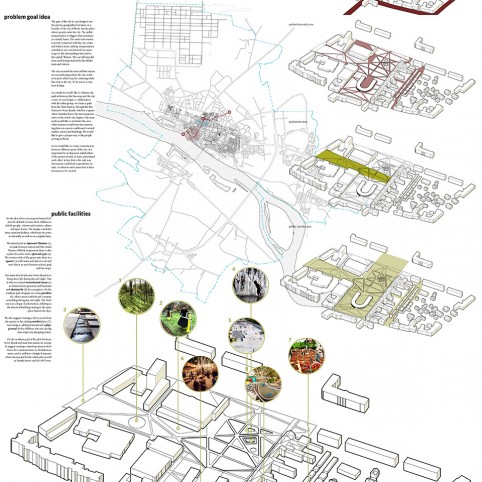 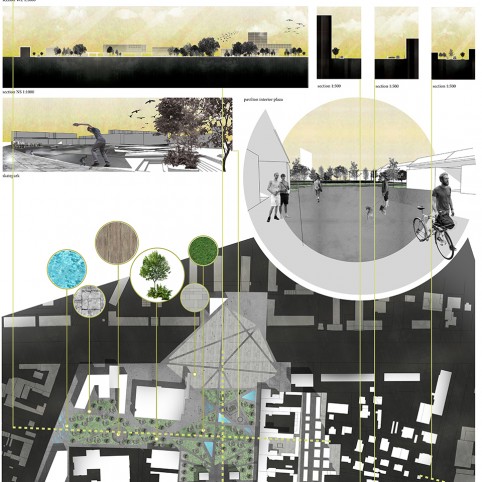 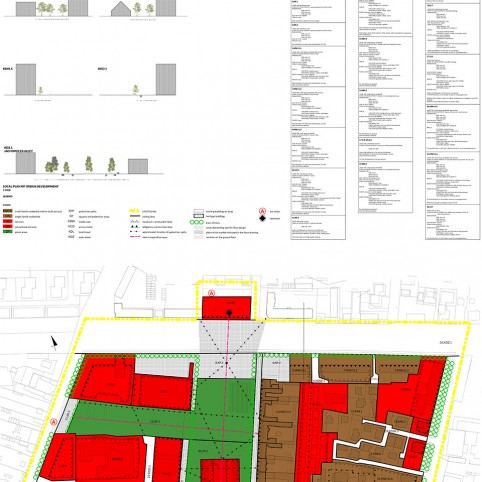