The designed pavilion is digitally recording and interpreting the presence and movement of people, who are inside, and processes the effects to acoustics signals. The entire project was implemented with the involvement of minimum technical and financial resources, which was one of the challenges posed to the students.

The inner layer of the pavilion has been designed according to the registered activity of users. The shape is contoured so as to provoke interaction by different behaviors. The installation uses a mechanism of projection. People, who are in the pavilion, move between the light source and the fabric, on which the shadows are cast. The camera located behind the pavilion captures image, which is then transmitted to computer that controls the whole system. Program written by the participants allows the redefinition of shades-sensitive fields, which then turn on and off the composed music tracks and manage the stream of generated sounds.

During the workshop participants were split into five groups: Sculptors, Builders, Developers, Composers and Coordinators. The teams carried out their independent tasks and developed together the concept and the final image of the installation. 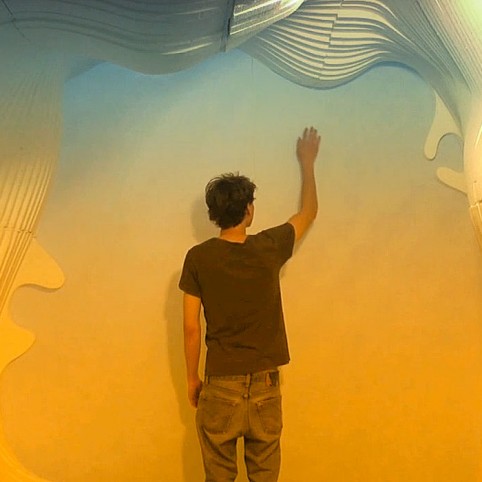